Fu-Te Ni, former lefty Tiger reliever has been released of his contract

Just announced, the Tigers have released lefty reliever/starter Fu-Te Ni of his contract from Toledo.

Fu-Te had been with the Tigers organization since the 2009 season when he signed a minor league contract to play for the Mud Hens. Before signing with the Tigers, Ni was a player in the Taiwan’s Chinese Professional Baseball League.

Ni made his Tigers debut on June 29th, 2009 against the Oakland Athletics. The first batter Ni faced was Jason Giambi and yeah, you guessed it, he struck him out.

Ni hasn’t pitched since May 18th for the Mud Hens and had been on the DL off and on throughout the season. He first went on the DL on April 18th with shoulder problems. Then, on May 20th he was put on the DL again with a strained UCL (elbow) which ended his season for surgery.

With all these shoulder/elbow issues Ni has been having, it’s a question as to wether he’ll pitch in the MLB ever again.

Bruce Rondon, the Tigers top closer prospect, is now just a call-up away from the Big Leagues.

On Monday, the Tigers announced they were promoting Rondon from Double-A Erie to Triple-A Toledo. His call-up was impart to his outstanding numbers at Erie. In 21 games, he had an ERA of 0.83, 12 saves and 23 strikeouts. Also, the recent injury to Mud Hen closer Chris Bootcheck played a role in his promotion as well.

Tigers general manager and CEO Dave Dombrowski was quoted saying “He’s ready to go to Triple-A, in our opinion”.

Bruce early in his career had issues with walking to many batters. His BB/9 (walks per nine innings) last year at Low-A West Michigan was 7.6. This year, it has improved vastly. Between both Lakeland and Erie, his BB/9 was 3.8.

Rondon is the next Tigers closer in waiting, in my opinion. He has a real heavy fastball. At times, he’ll average 100+ mph on it. To go along with his fast fastball, is the slider, his out pitch. Which has a lot of movement on it due to his arm slot he throws from.

If he can keep his BB/9 down and continue to strikeout hitters with regularity, he’ll definitely make a bid to make the Tigers roster in 2013. Which, if I know Tigers fans, he’ll be a popular choice to take over the Tigers closer role in favor of the Big Potato, Jose Valverde. 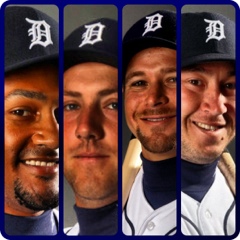 Neither of the four guys were expected to make the roster but, Eric Patterson made a bit of noise posting some pretty good numbers, going 6-for-18 with a double, a triple, the two homers and four RBIs. I wouldn’t be surprised to see Eric up with the Tigers sometime this year.