Posted by Travis Hensley on March 29, 2012
Posted in: Trade Rumors. Leave a comment 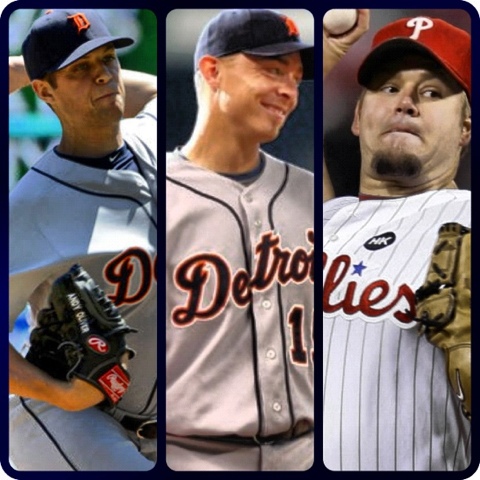 There has been speculation from Detroit News baseball writer Tom Gage that the Tigers might have a possible trade in the works. In a recent article Tom wrote,

“Upon arrival at the stadium in Jupiter on Wednesday, general manager Dave Dombrowski immediately sat down at the end of the Tigers’ dugout with Leyland — the way they often do at this time of spring training when they are discussing confidential matters involving players — and/or trades”.

And this statement from today,

“And now this: The Tigers didn’t burn the midnight oil with meetings, but they’re burning the mid-morning oil. Even with the Tigers’ game being a 6:05 p.m. game against Washington, all the decision makers were at the clubhouse by 10 a.m. on Thursday — at least their cars were.” “It’s not uncommon for Leyland to arrive extremely early for a night game, of course, and it could be that Dombrowski had an early staff meeting. There’s no guarantee this was a trade talk session.” “But at this time of the spring training, with time winding down, and several signals that something could be in the works, it feels like something is.”

Gage said that there is some speculation that the Phillies might have some interest in Tigers utility man Brandon Inge. If this is indeed true, I’d think that the Tigers would show interest in right-handed starter Joe Blanton, who’s name was brought up in trade rumors earlier this year.

The Tigers would have to eat most, if not all of Inge’s salary for 2012, which is $6M, for the trade to be possible. It’s uncertain wether or not the Phillies would so that trade straight up so, maybe the Tigers would offer up recently demoted lefty starter Andy Oliver?

Here is the Scouting Report on Joe Blanton:

The 30-year old right-hander was a 1st round pick in 2002 out of University of Kentucky, and is in his 9th major league season; he spent five seasons with Oakland and is in his 4th season with the Phillies. He’s 72-60 for his career with a 4.30 ERA and 1.34 WHIP. He has been referred to as a “league-average/innings eater” in the past, but was rewarded and will make 21 million dollars over the next two years.

Blanton throws strikes and has a very compact delivery, releasing from a high 3/4s arm slot. He features a 88-91 mph fastball that he will throw to both sides of the plate, a slider (83 mph), as well as an occasional curve (76 mph) and change-up (81 mph). He also has started to throw a few cutters per game (88 mph). His two best pitches are his slider and change-up. He’s a fly-ball pitcher who has been prone to the long-ball the last two years. Last year his fastball was his favorite pitch with 2 strikes, with poor results (6.8 K/9, below league average).

To sum that up, Blanton is just an average innings eater pitcher. Which is all the Tigers need.